Mayor Antonio Halili, the controversial mayor who conceptualized the ‘walk of shame’ for criminals in Tanauan City.

A controversial Philippines mayor who gained notoriety for parading people arrested on drug offenses was shot and killed by a sniper at a flag-raising ceremony at Tanauan City Hall Monday morning.

Tanauan City Mayor Antonio Halili was killed by a single shot to the chest from an unknown assailant, Police Superintendent Renato Mercado told CNN, in a hit captured on video which showed scenes of panic seconds after the shot was fired.
In the video, Halili is seen standing in a line with government employees as the flag is raised and those in attendance sing the national anthem. ​
As the camera strays to film another group, a single shot rings out, followed by screams and a woman’s voice, saying “oh my God” in English. While the victim is not seen on camera after the shot is fired, the content of the video could be upsetting to some viewers.
The mayor’s security returned fire, according to state media Philippines News Agency (PNA), causing panic as government officials and staff ran for cover.
Gerry Laresma, the government employee who shot the video, told PNA it wasn’t clear where the shot had originated. He said Halili had received death threats because of his strong anti-crime push.
Vice Mayor Jhoanna Corona-Villamor told CNN that she saw the gunshot hit him “right in the middle of his chest” and, through her fear, worried that he might not survive. Then she fled.
“When I saw everyone running, I started running — I went inside City Hall. I was still in panic then I heard more gunshots. I asked my staff to check if there were more (people) hurt; thank God no one else was,” said Corona-Villamor.
“The gunshots were actually from the mayor’s security hoping they would hit the suspect as they fired towards the direction where the gunshot came from,” she added. 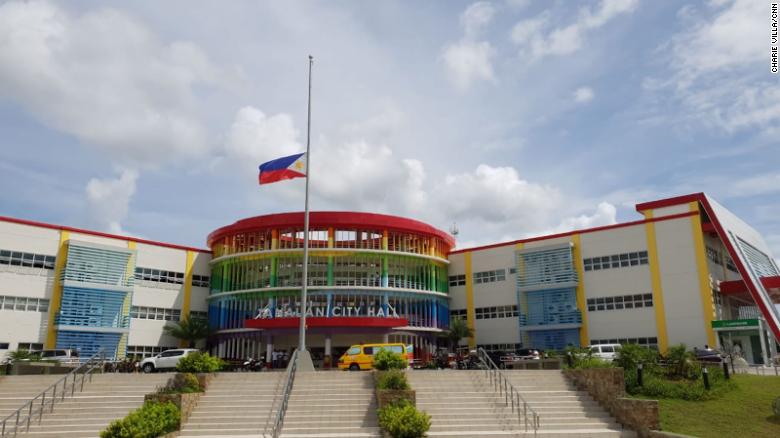 The flag in front of Tanauan City Hall flies at half mast following the murder of Mayor Antonio Halili
She said that she was still shaken by the experience.
“Who wouldn’t be scared when the mayor was shot right beside me and in full view of everyone?
“Everyone here is mourning, grieving… we lost a great mayor,”​ she said.
Provincial Chief Superintendent Edward E. Caranza told PNA that the bullet was fired from a distance, most likely using a 5.56 or 7.62 caliber high-powered rifle.
Halili was declared dead at the Reyes Memorial Hospital in the city less that an hour after the shot was fired around 8 a.m. Monday (8 p.m. Sunday ET), attending physician Alexander Carandang said.
Philippine National Police Chief Director General Oscar Albayalde said that a regional special task group had been convened to investigate the killing, according to CNN affiliate CNN Philippines, and that the suspect parades were being considered as a motive.
Presidential spokesman Harry Roque condemned the killing, saying that Halili was an ally of Duterte, and that justice would be served, CNN Philippines reported.
Shocked city employees mourned the loss of the well-liked figure. “We did not just lose a mayor but a father,” one told CNN, adding that he always greeted them with a cheery “good morning” upon arriving at City Hall.
His assistant, Malen Calimahad worked for him for five years and said she’d miss “the Mayor’s jokes. He was a happy person.” She said that he’d been under the weather for the past few days but came in anyway, such was his dedication, Calimahad said. 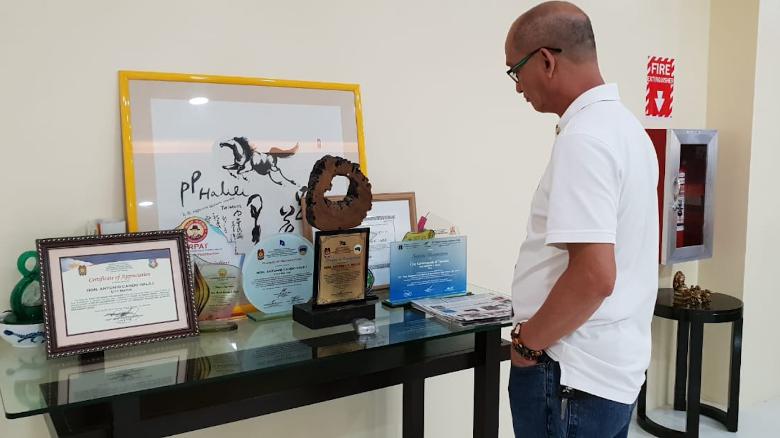 Mayor Halili’s aide Carlos Mojares looks at his boss’ awards and trophies. He says Halili was incredibly proud of his collection.

The ‘Duterte of Batangas’

Those paraded had confessed to drug offenses but had not been formally charged, Mayor Halili told CNN in an interview in 2016.
Halili started the contentious policy in 2014 with the help of his 70-strong “anti-crime group,” government officials who dressed in all black and patrolled the streets, some armed with their own guns.
Manila
Tanauan City
He came to prominence in a zero-tolerance climate for drug offenses in the country, led by President Rodrigo Duterte’s infamous war on drugs, which has seen thousands of suspected drug users and dealers gunned down by police and vigilantes.
Halili identified strongly with the controversial leader — “They call me the ‘Duterte of Batangas,'” he told CNN in 2016, referring to the province in which Tanauan is located — and said he was a proud supporter of Duterte and his controversial policies.
Advocacy organization Human Rights Watch condemned the killing.
“The killing this morning of Tanauan City mayor Antonio Halili, like the thousands of killings in the ‘war on drugs’ of the Duterte administration, demands immediate and thorough investigation by Philippine authorities,” a statement released by the group says.
“While we did not agree with Mayor Halili’s method of dealing with crime and illegal drugs in his city, his murder is condemnable. He may have deprived many Tanauan residents of due process but that doesn’t mean he should be deprived of it too.”
Even before Duterte came to power Halili had made a name for himself with the controversial perp walks.
Corona-Villamor says that Halili’s campaign against illegal drugs would “definitely” continue.
“I am calling on President Duterte to help Tanauan and its people to get justice for the good Mayor,” she said.

When CNN spoke to Halili in 2016, the colorful mayor — his office at City Hall features a framed, photoshopped picture of him as Iron Man from the Marvel movies — had recently embarked upon his second term in Tanauan, a bustling city south of the capital Manila.
He said he had stopped the practice of parading suspects, known in local media as the “walk of shame” when Duterte took office, saying that he didn’t “want police to misconstrue” his actions.
“Somehow there is a lot of confusion. The President will say ‘I will kill them all’ then backtrack. So as a mayor it can be confusing what to do.”
He said that over the course of his first term he had held around eight or nine parades of suspects. “We parade rapists, thieves,” alongside drug offenders, he said. “Just those who do wrong.”